Gray was born in Austin, Texas, the son of Alan and BJ Winsler. In his first few years he crashed his father’s truck, was bitten by countless fire ants, and spent many days watching The Simpsons with his dad (against his mom’s wishes). Throughout it all he carried a plush rabbit with him by the name of Blue. Just before Gray’s 4th birthday, his parents moved him to Normal, Illinois where he grew up. 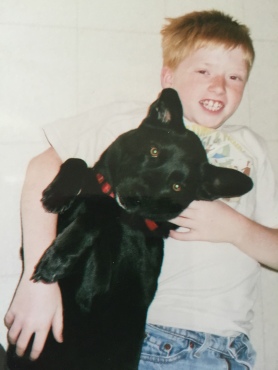 Gray’s first official job was at Taco Bell as a “Food Champion”. He applied to work there not because he needed the money, but because he loved The Bell. He is aware this is weird. Despite working there for six months and considering it one of the most stressful experiences of his life, he is still grateful for all The Bell has given him, and hopes one day they will bring back the Volcano menu. Again, weird. You can read his article reviewing their Naked Chickens Chips here.

Gray earned his Associates Degree from Heartland Community College at age 17 because he is a huge nerd. He then left to study Computer Engineering at Ohio State for a year. Deciding Ohio State was not worth the $40,000/year price tag, he left after two semesters. The next year was a blur in which he delivered pizzas for Hungry Howie’s, saw Mumford and Sons (his all-time favorite band) at Bonnaroo, and briefly owned a dog-care business known as Call of the Wild. You can read more about this time here.

Knowing he eventually wanted to live in New York City, he decided to do so in the most cliche way possible: he sold his car and bought a one-way ticket to the Big Apple, carrying with him nothing but a guitar and duffle bag. As Gray describes it, “It is the best decision [he’s] ever made.” On his first day in the city, Gray was hired as a canvasser for Oxfam. There his job was to dance around the streets of New York, asking random strangers for money. He claims this is “tons of fun”.

During his tenure at Oxfam, Gray welcomed over 250 monthly donors to the organization. This he accomplished by an excessive amount of smiling, hundreds of Dad jokes, and no small amount of high-fives. “Do not underestimate the power of a good high-five,” Gray says. However, for him the most fulfilling part of the job was getting to train others and help them become incredible canvassers in their own right.

After a year at Oxfam, Gray decided to finish up his undergrad at the City College of New York. CCNY is a great school, and he is lucky to have studied under Professor R. B. Bernstein and received mentorship from the “AMAZING” Jennifer Lutton. He participated in a number of internships, including a six month stint in Assemblyman Joe Lentol’s office, and a Summer internship at Senator Gillibrand’s office in D.C. Above all, he learned an excessive amount about the “Founding Fathers” and reinforced his status as a massive nerd. He also completed a thesis you can read here.

Gray now lives in Spain with his beautiful and wise girlfriend, Claire. She’s teaching him Spanish as they travel through Europe together. Soon, they are planning to adopt a cat and name him Benji (short for Benjamin Franklin Winsler).